At the camp ground of Seljaland's foss we noticed this waterfall in the back by the sound, but we did not go around the corner. We kept that for the next morning. And then, when we were about to leave, we checked it out. And we were pretty amazed. Bad weather and so on, but really pretty scenery: The waterfall has cut through layers and layers of rock, leaving itself hidden deep in the rock, just streaming by.

Right with us, an Italian family arrived. They went right inside the fall and no matter what they were doing, one person at least was always right infront of the fall. I mean: even then just discussing what they would do, one of them was constantly moving infront of the fall - for no reason moving there as another one was about to clear the way.

We were standing a few meters further back, trying to capture the scene. Two big cameras, two tripods, really not to be overlooked. But no matter how pleading we got, they never cleared the way. We got more and more of the impression they did this on purpose. Their gestures and looks told that pretty solidly. They did notice us, they did see us plead for just an instance.

I mean: We had no problem with them checking stuff out, being there or moving around. Just the constant acting of making the most appearance was not so pretty.

Unfortunately we had to get going at some time and when some of them settled into the grass along the side we decided that they would not clear the picture for one moment even. I mean, this was really all we were waiting for. But we did not get that.

We got lucky a few moments in time and got those rare shots with no one visible in them.

We will be back to that fall and take the photos we want to have. And this time, there will not be anybody in our way. I am sure of it.

So here is the waterfall. With a person. So what. 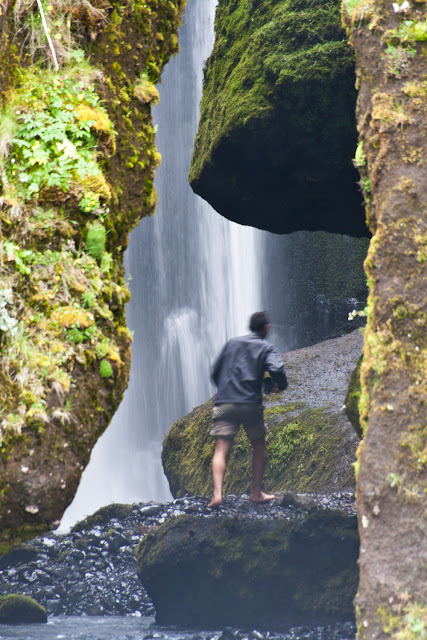