In March 2010 we were about to set out to a trip to the USA, stopping over in Iceland for a few days. Just days before take-off the volcano erruption of Fimmvördurháls began.

First we thought the airport in Keflavík was going to be for the time being. We thought we might not be able to go. But the airport opened up just about a day before our flight and we did get to Iceland.
The options to get to the volcano were just posted in some places. But the heli flights were mad expensive and the jeep tours that went all the way up to the flowing lava were really tempting but also very expensive.
We finally opted for more liberty and rented a little Jeep from cheep jeep in Reykjavík and drove out ourselves.

First we went to the southern coast at Skógar Foss and tried to start the hike up to Fimmvöduháls to see the lava. But it was majorly cold and regular heavy winter gear was just not enough. The polar cold between the glaciers got down to about -30 degree Celsius around those places and we were just not set up for that. We talked to the hikers and they told us that if we did not hike in through freezing mud for six hours we would not see anything.

We could not drive in to Thorsmörk behind the eruption, because that road had been closed and Thorsmörk was about to be evacuated any moment. Then we were told that the road to Fjallabak was on the far side of the valley of Thorsmörk and that that road was open and used by volcano watchers.

We did drive out there. The term road was a little far fetched since most of it was driving through river beds and river runs. The little jeep held up well and got us to the perfect viewing place.

We did spend about 7 hours there in an icy car because the spot was perfect but the view was supposed to be better at night. And it was. Here is the view we enjoyed. 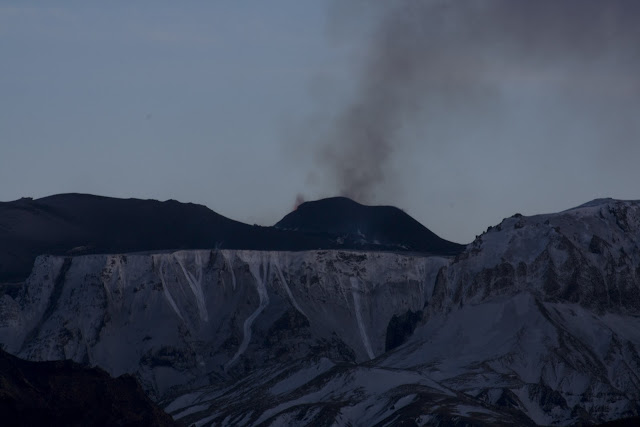 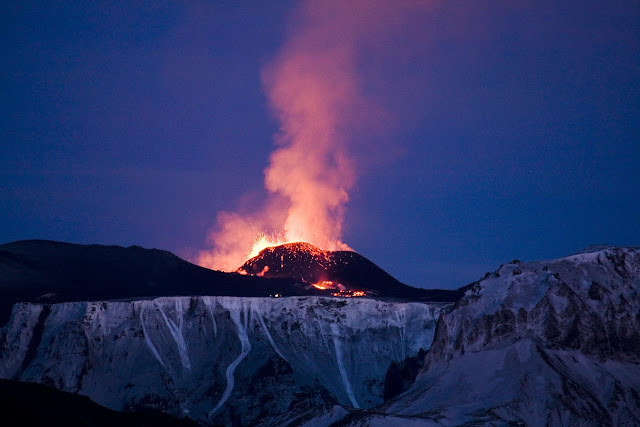